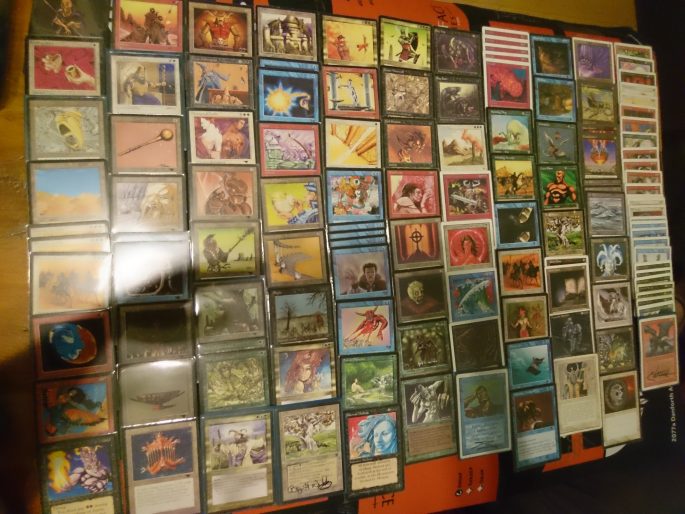 Editor’s note: This post is a strange one as it came from a difficult time and place for me.
cw: Death, dismemberment, depression. Seriously.
To jump to the mtg content, click here

Speaking with no sarcasm or hyperbole, the summer of 2019 has been the absolute worst of my life. My family had plans to spend the month of July at our cabin in rural Ontario, work remotely for part of it, and my wife had plans to fly west to BC to help out a friend of hers out there. All of that went to hell in a strike of an axe, which was just the first in a series of increasingly difficult situations for myself and my family.

On 2 June, while up at our cabin, chopping wood, with an axe that I forged earlier in the year, a serious mishap occurred that resulted in me permanently losing most of the first joints of my ring and middle fingers on my right, dominant, hand. Later that same day, once I was back from the ER, we learned that my step-dad had been in the hospital for roughly a week due to complications from alcoholism (he’s been clean for years, but the damage is done). I was put on leave for at least six weeks, my wife cancelled her BC trip and spent the next two weeks traveling 90 minutes each way to spend time with her dad, and thus not be working on her business like she needed to. We get it, life happens and we need to compensate and what not. It was a lot for a single day.

During all of this, I accepted that I was not in a good mental space prior to all of it, and didn’t want these circumstances to drag me down further. I reached out to a therapist who a mutual friend suggested, and this has been wonderful. Canadian healthcare is pretty rad, but it excludes mental health, so I rely on my private insurance, which is also not fantastic, but it’s better than nothing, and I could immediately see improvement. Yay!

We had plans to take a small family trip down to Ohio to see my folks in July, which I was very much looking forward to. Seeing my parents, being at their house, and hitting up some local game stores are what I look forward to in my Ohio trips. Well, my mom was hospitalized for pneumonia and it made sense for me to get down there asap to help out, having my wife and kiddos come down once grandma was better, and thus able to spend more time with our two high energy kiddos. Things didn’t go as planned, the theme for the summer, and my mom passed away due to un-diagnosed liver cancer.

I stayed around after the funeral to be with him and help him out, which meant that I spent about five weeks in the States. In less than stellar mental health. This resulted in a fair bit of retail therapy, which I’m not particularly proud of, but here we are.

There’s a small shop in Yellow Springs, Ohio, called Superfly Comics, and it’s my first stop as far as Ohio LGSes are concerned. It doesn’t have all the high end display cards or any of that fanciness, but what it does have are long boxes organized by set that you can pull out, sit at the table, and leaf through. Additionally they have some binders and a display that tends to have a couple of gems in them. On this particular trip, I spent a lot of time in their Time Shifted, Revised, and Ice Age boxes, pulling out loads of twenty cent staples; Disenchants, Ice Floe, Flying Men, Revised basics and the like. Sadly, I’ve pretty well cleaned them out of great stuff, and being a small town, they don’t have a lot of turnover.

Next on the list is Epic Loot, a massive gaming and comic store located in the dying Upper Valley Mall in Springfield Ohio. They also have long boxes that you can leaf through, although it’s one at a time and you have to ask for them. This was the first time I learned that customers are allowed to look through the boxes, and I was very happy! I made several trips back to this one as they have a lot of product. Again, Revised and Time Shifted were popular choices for me, but this time there were also Unlimited and the first four expansions to look through. My first trip I nabbed the cards in the photo below, and was very excited for the Factory as it was very reasonably priced!

Around this time, I had to drive my family up to Columbus, Ohio, so they could fly back to Toronto, post funeral and whatnot. After dropping them off, I visited Comic Town, a shop I’d never heard of, but learned of through the Old School Discord, as they’d hosted MisprintCon the weekend prior. They have a great selection of old cardboard, and binders that are chronologically ordered that you can flip through. I reigned in my wants and only grabbed a Revised Granite Gargoyle with Rush’s signature, and maybe something else small, but I don’t recall it being much. I also visited The Soldiery, but they don’t allow browsing, so I was out. They do however have a killer selection of booster packs at decent prices, so I might revisit for that alone.

As I mentioned in the giant intro, I’ve been on disability (EI for Canadian readers), so my income is not what I’m used to, so I was trying to keep my spending somewhat reasonable, and then a good friend offered to buy me a day pass to GenCon, an offer I couldn’t refuse. I drove over to Indianapolis, registered for the Old School event for the day and hit up some vendors. I had a lot of self control here, and only bought a King Suleiman that was probably marked at it’s buylist price. Amazing cards abound at GenCon, so if you can make it, I highly recommend it.

Spending so much time in the States meant a lot of scheduling changes, one of which was my interview to renew my Nexus pass. Originally that would have happened in Fort Erie, Ontario, but that’s six hours or so from where I was in Ohio, so I moved it to Port Huron, Michigan, thus giving me a chance to hit up some shops there. The first one I tried, Vault of Midnight, only sold packs and was more of a comic book store, a bit of a disappointment. However, I then headed over to Eternal Games to see what they had. First impression, huge store with singles organized by color, meaning no browsing for customers, and their displays were almost entirely Modern cards. Sigh. Then I saw a binder on the counter and started looking through it. Woah. I traded some MH1 snores for some Beta Commons as prizes, a bunch of Legends, some Arabian Nights and Antiquities stuff, and generally just got awesome cards for fair prices. I passed on some cards, making a mental note to swing back by on my drive home later in the summer.

Back in Ohio, I dragged my buddy Jacob to Bell Books and Comics, a shop I’ve been aware of for years but never visited. Shame on me for sleeping on this visit for so long. Binders to browse, a great old school selection in the display cases, fair prices. My favorite thing about this shop though is that their binders have prices on individual cards, and are about five years outdated. The proprietor explicitly states that the prices are wrong, so don’t go by them, but it was a great time capsule. Remember when Drop of Honey was only thirty bucks? Or Library was only fifty? On this leg of my rampant consumerism trip, I got a Golgothian Sylex, the final card needed to complete my Antiquities set, along with a second Colossus of Sardia for my Tron deck. I will for sure head back here as they have the largest selection of any shop in the Dayton area, and were extremely nice.

One day I decided to head down to Trader Joe’s to get some cheap groceries, and on my way I realized that I’d be driving by the location where I used to play enormous amounts of Warhammer 40k. Turns out that it’s still a game shop, called No Limit Gaming, with different owners and more geared towards CCGs and console gaming. Again, no binders or boxes to browse, but their displays had a nice selection. This particular trip led to me catching the dragon I’ve been chasing since returning to Magic; Angus Mackenzie. This is the only card that I remember owning my first time around that was not in my collection now, and it was about as inexpensive as I’ve seen them. I also scored a signed Pendelhaven and signed Psionic Blast because fuck it, why not? Not a shop I’ll likely frequent, but if I were after something specific I’d definitely check there.

My time in the US was winding down, so I made certain to allot some time to swing back by Eternal Games. Definitely worth it. On this trip, they recognized me, a pleasant surprise, and chatted with me more and pulled out the nice binder for me to peruse. Damn was it nice! Full 40 Revised duals, Juzam, Candelabra… Lots of the good ones, but I knew that I had way overspent in the last few weeks so I took this opportunity to just grab a Junún Efreet and Arena of the Ancients.

Made it back to Canada to return to some sort of normal routine and made a pact to stop buying cards until during/after The Fire Ball. I have enough new toys that I need to brew with, and also use for some other charity type projects.