Since getting into the Old School format, I’ve thought quite a lot on my history with the game, what I like, why I continue to play, what has brought me back to it after selling out, etc.  There are two main answers to these: nostalgia and friendship.  I have a hunch that these are fairly universal in the Magic world on the whole, and particularly true for most of the Old School players.  I’ve never been a good player, but I’ve always enjoyed playing.  It’s a reason to hang out w/ friends and have some focused, social fun. 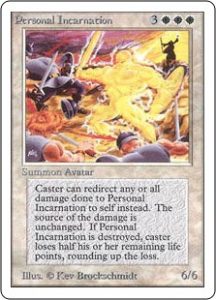 My introduction to the game was with my friend Nick, while visiting two brothers for some D&D playing while in high school.  The older of the brothers was a year older than me, and had a few decks of a game called Magic the Gathering that he and his brother were figuring out how to play.  We paired up, Nick and the older brother, myself w/ the younger, and proceeded to butcher the rules, and since this was around the time of Unlimited, the rules were rather handwavy anyhow.  Regardless, Nick and I were hooked.  We went to our local game store, The Bookery, and grabbed some starter decks.  I remember opening the deck in the backseat of my mom’s car, and my first rare was a Personal Incarnation, which started my love of white cards.  I tried to collect every white card available, which wasn’t very easy due to the lack of resources available around the Revised time period.  But I still tried.  I crammed my deck with Circles of Protection, Castle, Serra Angels, White Knights, and loads of sub-optimal cards.  I had no idea about card advantage, life as a resource, or any real interaction outside of combat.  Nick, however took to blue and black and quickly figured out the control archetype, which pretty much summed up my early days of playing.  Since I got in at the tail end of Unlimited, and I know this is akin to sacrilege in the Old School community, white borders define Magic for me.

I remember Fallen Empires being released, and splitting a box of it, my first time ever buying a box, with Nick and another friend, Vince.  At first it was exciting, but by the end of the box, it was pretty miserable.  When Ice Age came out, we split a box again, and this time it was exciting!  Icy Manipulator was back, Snow Lands were a thing, which meant black border basics were abundant, and there were new Starter Decks to buy.  I didn’t know then that booster packs were the way to go to get good cards, so Starters were far more interesting. 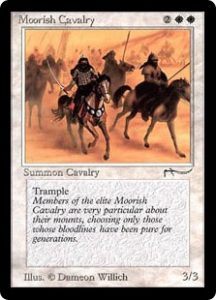 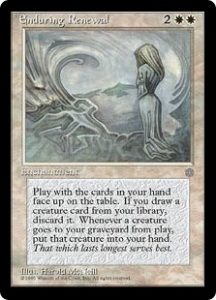 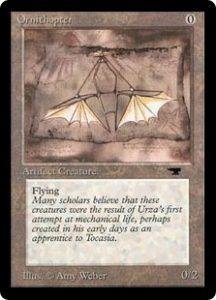 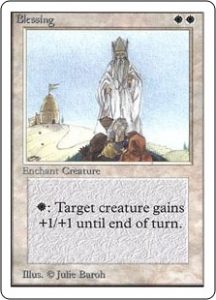 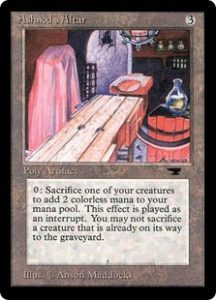 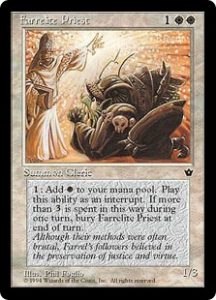 Around this time, we started hitting up local tournaments around the Dayton, Ohio area, and learned about all the other cards out there.  I, of course, did terribly as I played cards that I liked, and always played too few lands, whereas Nick was figuring out real strategies.  He built a deck around Ornithopter, Enduring Renewal, Ashnod’s Altar, Farrelite Priest, Blessing, and trample creatures.  The first time he went infinite, his opponent went berserk!  He’d never seen an infinite combo either and tried to force Nick to go through the combo as many times as mana he wanted to produce, but luckily the judges were on our side.  Imagine a 20+ year old man screaming and cussing out some teenage kids over a game of cards.  It was amazing.

Shortly after this, I went away to university, and my cards stayed neglected in a box at my parents house.  After university, I was unemployed and needed money, so I sold the collection for $300 USD and a terrible laptop.  I was fine with it then, but as I look back on the cards I know I had, it saddens me.  So, my journey back into Magic has involved me trying to replace the cards I miss, and I’m happy to say that I’m mostly there, except for an Angus Mackenzie and a Word of Command.

I’m fairly certain that this relationship effectively sums up a large number of players’s experiences with the game in it’s early days.  I can’t count the number of people I’ve met who tell me the identical story of selling all their cards and the outcome of the conversation is either one of chasing the dragon (like me), or of incredulous disbelief at the value of some of the cards they parted ways with.

We are currently playing with the Old School 93/94 sets, including Fallen Empires, Revised, and reprint sets, but how I long to play a format that includes Ice Age so I can rebuild that Enduring Renewal combo deck.