Long ago, in the early days of Magic, the concept of card advantage wasn’t a thing, and certainly wasn’t exploited like it is in the current formats.  Ice Age introduced us to Brainstorm, a card that now dominates in any format it’s legal in, but before that, there were some competitive decks that began to understand the true power of drawing cards.  Looking at an obvious example from Old School, The Deck, which runs four Jayemdae Tomes, Ancestral Recall, Timetwister, Braingeyser, and a Library of Alexandria, it’s a powerhouse of card advantage.  We all know that the blue Power spells are very powerful, as is an early Library, but what about the card drawing artifacts?  The main ones in the format are Howling Mine, Jayemdae Tome, Jalum Tome, and Book of Rass. 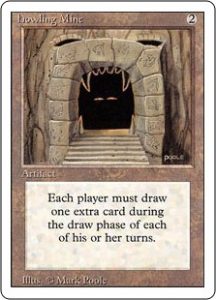 Howling Mine is the cheapest to cast, allowing for very early card draw, but it’s also reciprocal, thus speeding up your opponent as well. Lots of decks pair the Mine with Relic Barrier or Icy Manipulator to make the card advantage one-sided, but then the low cmc of Howling Mine is wasted on controlling factors.  Howling Mine seems to work best in decks that punish the opponent for drawing cards with Black Vise.  I’m often hesitant to cast a Mine because I don’t get the immediate benefit of it and I worry that my opponent will draw into an answer on their first use of the Mine. 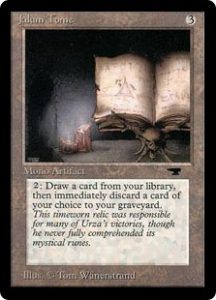 Jalum Tome comes in one mana higher in cmc than the Mine, but it also requires 2 generic to draw a card, making it essentially cost 5 for that first card.  Not too bad, but it has the downside of discarding a card.  Since Old School doesn’t have a huge amount of graveyard recursion, this means that the user has to be much more careful with Jalum tome than with other draw mechanisms, lest they end up behind.  That said, this one feels very “red” to me, and seems like a natural fit in most decks that run red.  It also works well in creature heavy decks where discarding a 2nd/3rd/4th copy of a creature is less vital than in a control oriented deck where there might be less redundancy. 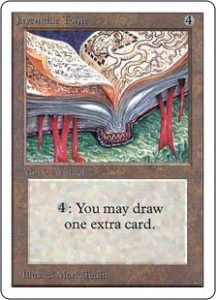 Jayemdae Tome is the workhorse of the format.  It’s got a four cmc as well as a 4 generic activation cost, but it’s one-sided and has no additional drawbacks.  Paying 8 mana to draw a card seems ludicrous when viewed through the lens of current Magic, but at the time, and thus in this format, it’s basically the bar by which all card drawing cards are judged.  If a deck can afford the mana to use it, it should run it.  Su-chi is also the Tome’s best friend as it translates into “when this creature dies, tap Jayemdae Tome to draw a card”, which is a really good deal.  Opponents are punished by the 4/4 for 4 beater by either damage or giving you a card. Win win! 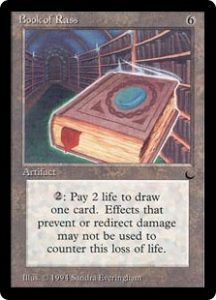 Book of Rass is a very interesting addition from The Dark that is more expensive than the others, is still one-sided, and is not a mono-artifact.  The downsides to this card are numerous though; 6 cmc, 2 mana to draw a card, and lose 2 life whenever you use it! I don’t think that this card is an instant include in most decks, but for decks that have decent life gain, via cards like Ivory Tower or Spirit Link for example, could make good use of it.  Another build could be one built around Mirror Universe to race yourself down to low life total so you can swap and then finish the deal more easily.

There are other card drawing artifacts that could be used, like Aladdin’s Lamp or Jandor’s Ring but neither of those are particularly playable, in my opinion.  Personally, I lean more towards the two Tomes as being the most useful for most decks, while Book and Mine are both situationally better.