Note, I’m terrible at remembering peoples’ names, and even though I went into this night with the intent of taking loads of pictures and writing down names for each match, well, neither of those really happened.  The entire night happened so quickly that taking out my notebook didn’t even cross my mind.  I’m also certain that I’m missing at least one match in here, but again, I can’t recall what it was.

I’m fortunate enough in life that I was able to take the summer to spend time with my kiddos and to free up my wife’s time a bit more to focus on her business.  It was fantastic, but it had to end eventually.  Job hunting began in early September, resulting in a company wanting to fly me out to their office in San Francisco towards the end of that month.  I was excited for the job opportunity as well as the possibility of meeting up with the iconic Beasts of the Bay while out that direction.  Well, it didn’t work out on that trip, but it turns out that I got the job and was flown down again in October to do some training, and this time, I made it out for one of the Beasts’ regular Monday night meetups.  Was not disappointed. 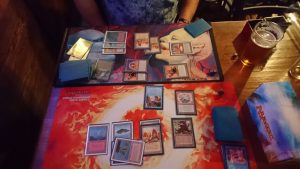 I prepared for the trip mostly by contacting folks on twitter to get a good idea of the lay of the land.  Elliot offered me a ride from SF to the bar, but since Monday was literally my first day of work, I was unsure of when I’d realistically get out of the office, so I opted to take CalTrain up and grab a ride share to the bar.  As luck would have it, Dave Firth Bard, aka DFB, was also in town for the week, meaning that I got to meet a lot of rad people that night.  I arrived at the bar around 7:30pm, a bit later than I’d have preferred, but the site that greeted me made it all worthwhile.  There were ~20 people playing Old School!  I got to chatting with some of the regulars and learned that 20 is almost guaranteed and that they have meets that have over 30 people fairly often.  This made me very happy.

Anyhow, I arrived and was quickly ushered to a table where a game just finished, pulled out a deck and got down to it.  I decided to start the night out with my Candleflare deck, which fared poorly.  In one match I was taken down by a Primordial Ooze, in a Juxtapose deck, where I never saw a Juxtapose played in 3+ games! note that this deck went on to place in top 10 most creative at Eternal Weekend! I did manage to get one win in, because my opponent got greedy w/ Sylvan Library, bringing his life down a bit, and the combination of [/c]Mana Drain[/c]ing him, then getting to untap and cast a Fireball for lethal was pretty great. Very fun chatting with the other players and seeing so much nice old cardboard being played.  Next up I played against DFB’s Spice Rack variant.  Holy shit, that deck is so fast and difficult to handle.  I decided to switch over to my Wolf Tribe deck to try and get under him, which came closer to working, but I still went 0-3, iirc.  Fascinating to see how that deck plays out though.  We all know how good Hippies are, but when combined w/ The Rack, Disrupting Scepter, and of course Hymn, this just gets away from you.  Despite being crushed multiple times, I very much enjoyed the games and the company.  During every game, there’d be a couple people taking breaks who would come over, introduce themselves, talk about cool tech, and generally be welcoming and inviting. 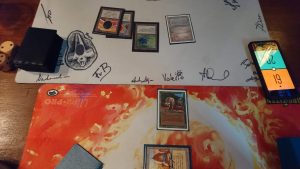 I still had some time before my ride back to SF was leaving, meaning that I of course found a new opponent.  He was on a ponza/zoo list that was omg brutal.  In one game he got two Strip Mine‘s and two Ice Storm‘s AND a Mind Twist at me in rapid succession.  Despite my Wolves curving out at 2, I couldn’t get anything to stick.  I believe that I won one game out of three by going wide enough with Wolves to chip him to death.

After that, Elliot was kind enough to drive me back to SF. Well, actually, we were so engrossed in conversation that by the time they asked where I was staying, we’d passed the exit, so we ended up near his place and me just catching BART back to the hotel.  The alone time on transit gave me plenty of time to process just how much of a fun night it had been.  Sweet cards, some awesome swag, fun games, but the thing that really hit me was how welcoming, friendly, and eager folks were.  I’ve been to a few MtG events in my day, and finding pick up games is usually an awkward process of trying to initiate conversation, hoping they play the same format as you, and hopefully at a similar tier.  Not here. Show up, people greeted me and basically forced me into games.  Now that I think about it though, I played someone before I played the Juxtapose deck, and it involved a Spirit Linked Guardian Beast, but I can’t recall anything else about that matchup, but here’s a pic of it. 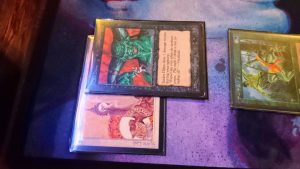 I also was given some lovely swag by the Beasts as well as DFB, once again cementing just how awesome the Old School community really is.